If you head to the climbing wall and watch the climbers, you’ll quickly find someone who is just starting out. You won’t have to ask them, you’ll see it a mile away: hunched shoulders, drooping head, a slightly nervous disposition. That’s not a criticism, merely an observation that any new activity, possibly none more so than rock climbing, can be overwhelming for those first few sessions and for those people, they will probably be doubting their own ability.

Now look around the room and you might see someone else who is easy to spot: the cocky climber. This one will probably have been climbing for a few years and will be walking the walk and talking the talk, whether they actually know it or not. Often it’s not one of the old guard, who tend to be a tiny bit more withdrawn, this will probably be someone who has risen rapidly up the grades and now flashes more climbs that others in the same gym struggle on.

His body language is different too: upright doesn’t do it justice, it’s often as if he’s trying to see how far in front of himself he can get his own nipples. Cocksure, tall and proud, this guy is the more than confident, he’s arrogant. If there’s a climb he can’t do, it’s poor or undergraded, it’s not his fault. No, he is cock of the walk and he wants you to know it, even if he doesn’t realise it himself.

These two examples sit at opposite ends of a spectrum: The DCBA Scale and it’s all to do with mentality. Ironically, they both have a similar likelihood to succeed too. So what are the other letters? And how do you find success?

Before we look at the scale, we need to define what we mean by success. Simply looking at grades isn’t enough for this and i’ll explain why with a short anecdote:

I was in Fontainebleau and two guys asked me how my day had gone. I replied i’d done a 7b, a 7a+ and flashed a 7a.

Please ignore the fact i was a bit of an arse being so blunt and no, i was not an 8a climber at the time, that day was a particularly good one for me. Indeed, they asked if i was an 8a climber and i had to say no but they missed the point and it is this: climbing any particular grade does not necessarily constitute success. For this we need to look at the individual and their own abilities.

The cock-sure climber from earlier may well be lapping 7b but that doesn’t necessarily mean he’s actually any good. Chances are, he’s got the potential to be even better but isn’t actually realising it, or worse is managing to climb himself into a trap. Yes he can campus up matchsticks but sooner or later he’ll plateau hard. But he won’t listen, he’s arrogant remember.

Likewise, for that self-doubting climber, getting up a 4 might be a huge milestone and a big step forward. If that is a new personal best then amazing, that’s fantastic and that’s what we’re looking for.

As coaches, we need students who are receptive to the advice we are trying to offer and these two students represent the two hardest ones for us to deal with. We need to build up the doubters to give them more confidence and bring down the arrogant, so that they will actually begin to listen to us.

That leads us nicely into the scale. I’m sure by now you’ve noticed that the D on the left stands for Doubt and the A on the right is for Arrogance. So what are the other two letters?

The C represents Confident. A confident climber is one who will throw themselves at a climb, certain they have a good chance of success.

The B means Belief. These climbers won’t just be confident of success, they will whole heartedly believe they are going to succeed. It isn’t a question of being sure, it’s a matter of being certain. Any failure to this climber knocks them slightly and makes them think: what went wrong? Why did i fail? Because i wasn’t supposed to fall off this climb and i’m sure as hell not gonna fall off it again.

Both of these attributes have their drawbacks. Too much belief and you expect things too easy, not enough and you won’t really be giving your all. Ideally, we want to be sitting somewhere in between the two – a balance between Confidence and Belief.

As we’ve seen, both Doubting and Arrogant climbers face a bigger change in mentality to reach that optimum point in the middle of the scale and thus realise true success by their own standards. 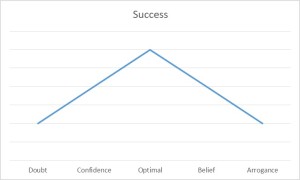 As you can see, the scale shows there is still a chance of success for those with doubt or with arrogance and perhaps i have over-simplified the graph by suggesting that those at either end have an equal likelihood. We’ll only know the true numbers – and indeed the validity of this model – with extensive research. Nevertheless, as a rough working model, it gets the point across.

Without changing anything other than the mentality of a climber, it is possible to eke out that extra bit of performance from them. I’m sure we can all think of examples of climbers from each category on the graph and i hope it will help coaches and climbers alike to maximise their own abilities.

Get the Beta For Every Climb

Our last full day on Dartmoor yesterday and the venue choice was an obvious one: it had to be Bonehill. For all that I love checking out a wide array of venues when I go on a trip, you've gotta make sure you hit up the obvious choices and Bonehill is definitely the go-to for bouldering in Dartmoor.
An actual climbing picture from yesterday: the Nose 6a at Gidleigh is one of the best problems I've done in a long time!
I asked @emks93 to get some photos of me while I was climbing today. Here's a selection of some of her best ones...
It may not be somewhere overseas and world famous but I've wanted to climb at Bearacleave for a long time. Yesterday, I finally made it come true. That said, I could've been in Kjugekull yesterday, the feeling of both places was remarkably similar.
Had a great evening at Clogwyn y Tarw today playing on The Punk 7c. Got schooled by the youth of Jack Pearce who clutched victory right at the death, the send sadly eluding me tonight. But on the bright side, I felt like I was getting back into the swing of things, did pretty much all the moves and have recorded a sweet sequence through the sit start ready for next time. Reasons to be optimistic from a great session!
Did a V5 at @beaconclimbing this evening. Made it harder...
Loading Comments...
Comment
×
%d bloggers like this: